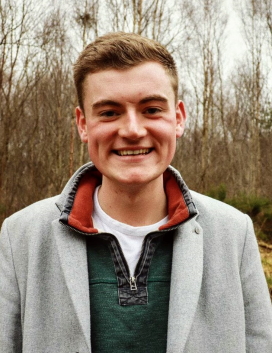 Rohan is doing Relay in Edinburgh, supporting the Christian Union in the University of Edinburgh.

Relay is a ten-month programme run by UCCF, a charity which aims to give every student in Great Britain an opportunity to hear and respond to the good news about Jesus Christ.

Relay Workers equip, resource and encourage student Christian Unions whilst being discipled and trained by a member of UCCF staff.

My name is Rohan and I am going to be doing Relay with Edinburgh University CU!

I am super excited to be volunteering with UCCF for the next year. A big reason I applied was because of the impact Relay workers had on my time at university. People at university, especially Relay workers, pointed me to Christ throughout my four years and it had a huge positive impact on my walk with Christ. Now I want to spur others just as I have been. I am really looking forward to coming alongside Edinburgh CU, encouraging and equipping them to share the gospel with their friends just as others have done with me!

It would be a genuine joy for you to partner with me in this ministry. Covid-19 has made me much more aware of God's sovereignty and power; without Him nothing can happen. So in that regard I would love for you to partner in this work by praying for me in committing the next year to God and that His will would be done.

Can you support Rohan?

Having a team of people who partner financially and in prayer with Relay Workers means that they can:

Pray for Rohan Give to Rohan

Prayer is a vital part of supporting Rohan’s work with Christian Unions. You can sign up for regular updates using the form below. Here are some prayer points from Rohan:

Thank God for this amazing oppertunity and a chance to share the gospel at Edinbrugh uni.

Pray for Edinburgh CU, that even in the midst of this crisis their hope would be in Christ and they would be a light to those around them.

Relay Workers are supported entirely by partnering with personal supporters, who will pray for them and give financially to enable their work. Thank you so much for considering partnering with Rohan in the coming year.

Before you give, you should know that: